Knowing a game’s a farmed-out low-budget spinoff of a wildly popular series should be all the information anyone needs to avoid the release in question forever, a game to be left unbought on a shop shelf next to all the movie themed cash-grabs and box-ticking trend followers hastily shoved out a greedy publisher’s door… unless that game’s the Japan-only 2010 PSP exclusive MonHun Nikki Pokapoka Airu Mura: a title that defied all expectations and actually did well enough to secure a “G” expansion for the same handheld in 2011 – that’s the version described and shown across this page – as well as a “DX” port (with some further minor additions) for the 3DS a few years after that. Not bad for a little game starring mischievous catpeople who may or may not be wearing sunglasses and/or riding adorable pigs dressed up as fluffy sheep, is it?

Your main task is to develop your little player-named village (you’ll also get to pick your Felyne’s moniker, appearance, and voice type before starting too) into something special, adding new facilities, improving the ones that are already there, and recruiting more outlandish cats to staff these expanded places along the way. It’s a simple but satisfying game-long errand to help the village grow from not much more than a few empty patches of grass and a pleasant stretch of beach to an area boasting a grand customisable guild hall with its own chef-packed kitchen as well as a vegetable farm, mine, fishing pier, bug-catching area, Popo farm, and more besides – there’s even a race track for Poogies, Monster Hunter‘s plump piggy pets.

And once you’ve got these places set up it’s on you to go around picking the vegetables, mining the ore, and catching the fish – luckily these areas are quite small (they tend to be fenced-off sections in a wider location though, so they never feel cramped) and as you can cat-dig at will to any previously visited location around the village it really doesn’t matter if you need or want to suddenly be beside the sea or halfway up a giant tree as getting there never has to take more than a few button presses anyway. Just as things feel in danger of becoming monotonous other cats start appearing around the village and will offer their assistance with these chores if you can complete a simple miniquest for them: “Catch me a Pintuna!” or “Pull up these weeds around the vegetable patch!”, for example. I should point out that there’s no Harvest Moon-like anything going on here: Like the mainline Monster Hunters your farming, mining, and mushroom, etc. areas (and everything else) occupy a predetermined space and these Felyne helpers all have set roles to play – a fishing cat will always and only fish and be happy to do so, for example – but that’s all part of the game’s easygoing charm. “Don’t worry about it” says Airu Mura G, “Go do the bits you want to when you want to do them and we’ll keep this going while you’re gone”. Gathered items can amongst other things be converted into points which can then be spent upgrading facilities around the village – if you’ve spent even a small amount of time with Monster Hunter this will feel very familiar – but they can also be saved and given to other Felyne, once per cat per day, as presents (a small heart will appear in the inventory next to any items the cat loves so you don’t have to keep a list of everyone’s favourites) which raises their friendship level – and when that reaches its maximum the cat will always give you a copy of their own outfit to wear. 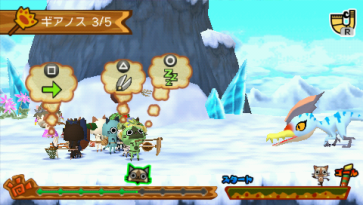 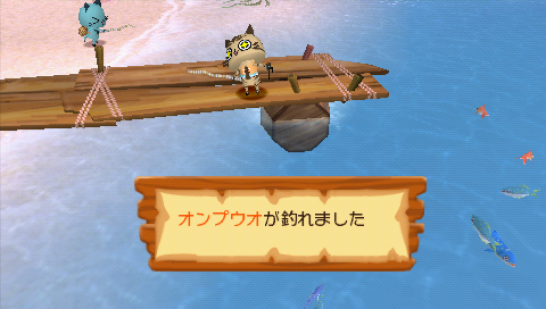 As with all Monster Hunters there comes a point where you must venture out into the wilds in the name of herb gathering and wyvern whacking, and Airu Mura G’s no different… apart from the literal herding of cats you have to master to get it done, anyway. Quests here still take place in all the usual lush forests, frigid mountains, and dangerous volcanos you’d expect them to but this time around locations are presented as linear side-scrolling mini adventures and you’re here to guide rather than directly control this rowdy gaggle until they cross the finish line found at the right hand side of the stage. This simplification could have been a catastrophe (Ha!) but making these places flat side-scrolling areas makes the game easy to play in short portable bursts, because if you need to kill X Genprey or gather Y Blue Mushrooms to clear a quest you know for a fact you’ll find them somewhere along the way – so long as you’re walking forwards then you’re definitely heading in the right direction.

It works like this: Your team of cats (you decide who to take along before setting out) will come up with three ideas of what to do in a new situation (such as spotting a monster or coming across a beehive) based on their type – a gatherer cat may see a Velociprey and want to steal a scale from it, while a hunter type will be itching to leap in and attack, and maybe someone else will want to just move on – and then you press the button that corresponds to the action you want them to perform. At that point how effective you are depends on the structure of your group, as a team that’s mostly composed of furry barrel-throwers is going to be a much better fit for taking down a Rathalos than a few enthusiastic fishermen and farmers, and then they’ll keep performing that action until whatever was ahead has been gathered, bopped, or whatever else you asked them to do and then they’ll ask what to do next – if there’s nothing ahead they may ask to walk on until the next interesting spot, sleep, or dance. What’s great about this system is how well it suits the tone of the game: it’s so very appropriate to not have full command over a group of eager catpeople and so when things don’t quite work out as planned in a funny sort of way the game still feels like it’s behaving exactly as it should, an amusing sort of directed mayhem playing out on the PSP’s beautiful screen.

The range of actions they can perform always feels surprisingly broad and always true to Monster Hunter’s tone: It’s possible to cartoonishly tiptoe past sleeping monsters, eat mushrooms and herbs rather than gather them up, throw nitroshrooms or dung at incoming enemies, sing, crawl, fish… and if none of the suggestions that cats offer suit the task at hand a quick tap of the right shoulder button will toot a hunting horn and they’ll throw up three alternatives – just be aware that these are determined by the type of Felyne you bring with you, so if you’re desperate to catch some bugs but only brought along farmers, hunters, and minstrels then that option’s unlikely to pop up. Whatever they are doing though it will definitely be fun to watch: Cook-type cats will cook mushrooms on a kebab skewer while less skilled teammates will just wolf them straight down, cats who get hit by freezing attacks will find themselves just a shocked head sticking out the top of a giant snowball, and monsters don’t crumple up in defeat but fly off into the air with an exaggerated whee! sort of sound as if you’re watching Monster Hunter’s vibrant take on an old Tom and Jerry cartoon. 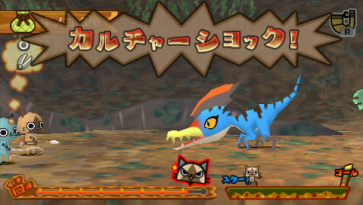 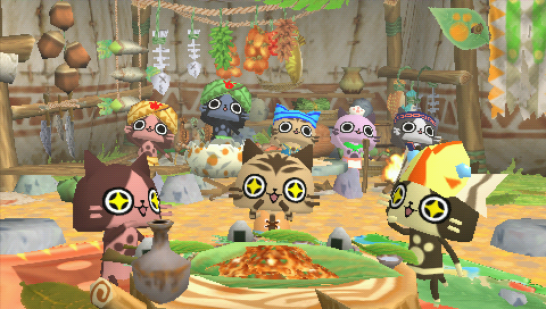 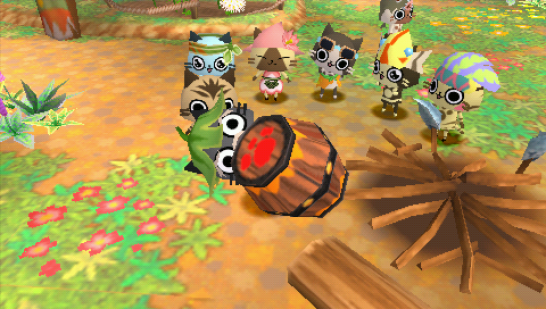 So there’s plenty to keep yourself busy with whether you’re hoping to lazily catch a few goldfish or take down a terrifying Rathalos and Airu Mura G’s always gives you just enough direction to ensure you have something or three in particular to be getting on with but no matter how slowly and casually you take it there will inevitably come a point when you’ve done everything there is to do… and that’s when the “G” content kicks in, the storyline seamlessly continuing from the morning after what was in the original release a game-ending party the night before and your beautiful little village given even more places to decorate and quests to clear. In keeping with the breezy nature of the rest of the game you don’t even need to clear the main game to see this new content either: On starting a fresh game you’re given the option of starting from the very beginning – working your way through the standard game before getting stuck into the post-credits G content – importing a save from the original game and taking it from there, or choosing to skip the original game’s story whether you’ve “earned” it or not and heading straight for the G content. What’s great here is that the game is gracious enough to pop up a message gently warning you that you’re going to miss out on all the little tutorials and introductions that help the basics make sense, but if you’re fine with that then go right ahead – and if you do skip to the new bit the game is gracious enough to ensure you’ve got enough of everything you need to keep your village running smoothly already sitting in your inventory: not as much as you would have had if you’d spent a game’s worth of Airu Mura’ing yourself, but you’re not put at a deliberate disadvantage or made to start in a sorry catless village as a cruel meta-punishment for choosing to not do or redo a game’s worth of work you may have already done before. 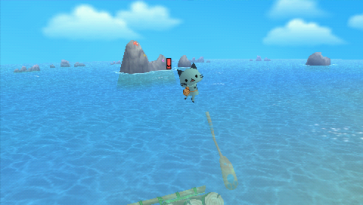 So what is Monster Hunter when you take away the monster hunting? A heck of lot of fun, actually. Airu Mura G’s a game with a lot of heart packed into its little UMD, a game that has exactly as much chaos and comedy an adventure with a bunch of weird cats running their own village should be. It’s a laid-back and enjoyable experience for all involved which makes it the perfect game to dip into at your leisure, something that’s guaranteed to raise a smile whether you’re determined to experience the whole thing in one unbroken playthrough or just want to pop it on for an hour to go out gathering some items you don’t really need just because watching the water slowly fade from clear sunny blues to the soft oranges of dusk as you fish is about as pleasant a gaming experience as anyone could ever wish for. There’s genuine pride to be had in seeing your village get bigger, busier, and weirder and while the Felynes themselves may be one-dimensional creatures with no routines of their own (this isn’t like… Animal Crossing, for example: your farming cats don’t go home at 6pm and you don’t have to make sure you’re around on real-life Sunday to see the old lady), the story imbues them with enough personality in their lines of dialogue and across their stylised faces for it to honestly not matter.

Airu Mura G may be very, very, different from just about every other Monster Hunter game before or since but it’s always respectful of its roots, true to itself, and a heck of a lot of fun for anyone lucky enough to play it.

[Your Ko-fi support made this post exist! Thank you so much for your donations!]