There are some temptations I can resist, but an Amiga RPG promising cyberpunk vampires enclosed in a box bearing the portrait of a man who is clearly bloodsucking sci-fi David Bowie is not one of them. What’s that? It comes on twelve floppy discs? I don’t care, all that disc swapping has got to be worth it in the end.

Now I have of course played some disc-heavy Amiga games in my time – Dragon’s Lair, Rise of the Robots, Indiana Jones and the Fate of Atlantis are a few that spring to mind, and a little more recently I’ve happily gone through some very enjoyable PC-98 adventures on a similar quantity of plastic platters – I know exactly how the old “Please insert Disc 2 Disc 5 Disc 4 Disc 6 Disc 2” dance goes and if that’s all BloodNet: A Cyberpunk Gothic had asked of me I wouldn’t be wasting this somewhat cathartic paragraph whinging about it to you. What we have here is an Amiga 1200 game that has asked me to swap discs just to access my inventory (and then swap discs again to return to the previous screen) and also to speak to someone in an area I’d just swapped discs to be in – I could’ve understood if this conversation had prompted the appearance of a unique piece of cutscene art or if it had triggered a lengthy scene but no, this was just another standard dialogue box containing a sentence or two of text. I’ve seen some new locations demand five disc swaps just to show up, and these areas usually consist of nothing more than one static background and a few stuck-in-place NPCs. And as for getting into cyberspace… honestly, it took less time to dial in to real early nineties internet than it does to access BloodNet’s shiny equivalent. Now you can – and absolutely should if you have one – install the game onto an Amiga HDD to sidestep most this pain and torment (the game remains sluggish either way) but even so just trying to play the game off the discs shouldn’t cause this much misery. I realised I had to do something about this sorry situation once I started making decisions based not on what I actually wanted to do but on whatever would incur the smallest amounts of disc switching, and so I caved in and bought the almost-identical-but-undeniably-better (you have no idea how much that stings when you were raised on an Amiga) DOS version from GOG (it’s also available on Steam too). 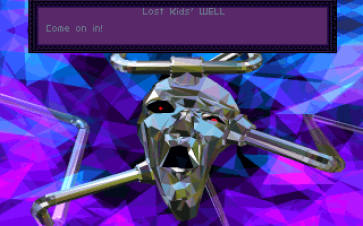 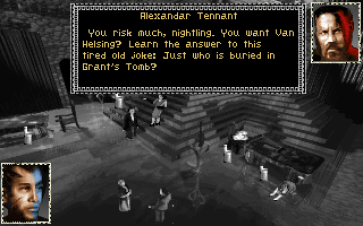 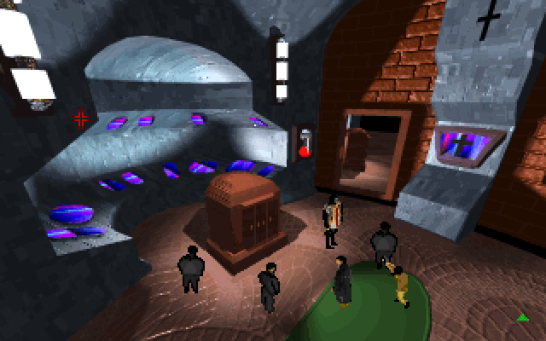 Now in possession of a version of BloodNet I could spend more time playing than fighting with and backed up by the oversized Amiga manual (a large lore-filled tome that in places feels more like printed material for a tabletop RPG than the instructions for a computer one) it was time to start over and experience the game as intended. The lead character this time around is a man called Ransom Stark, one of those sassy cyberpunk mercenary types turned into a vampire against his will during the game’s lengthy intro. Now he’s trying to escape the clutches of everyone from the local money-hungry megacorp to deadly immortals while also hoping to cure his bloodthirsty curse and prevent a powerful vampire from getting a hold of the mysterious “Incubus” and extending their merciless expansion into cyberspace all at once.

This all begins with a set of randomised questions about hypothetical mercenary jobs to determine Stark’s base stats. Many of these are fairly typical cyberpunk fare: You’re hired by one faction to wipe out another so do you choose to tackle them head on, go into cyberspace and mess with their finances, or talk them into trouble? The response you settle on alters a relevant range of stats on your character sheet in an obvious way – those who prefer smooth-talking will see stats related to quick-thinking and leadership rise, whereas those who prefer a punchier strategy will come out of this Q&A session with a stronger version of Stark. The interesting thing is that while faith, humanity, and bloodlust are all part of his character sheet BloodNet has no interest in the player’s morality or personal decisions outside of feeding time: The manual warns that devouring a more innocent soul will lose Stark a greater percentage of his humanity (suffering either a complete loss of humanity or full bloodlust are both instant fail states) than sucking a common thug dry. It’s also worth mentioning that there are a few mandatory battles in the game that Stark must participate in, so for all the apparent flexibility on offer having your lead become a peerless tech wizard who could talk his way out of Hell itself is going to make some points of the game anything from extremely difficult to literally impossible.

Events unfold against backgrounds made up of “Astonishing 3-D Hallucinographic art” as the back of the box puts it – or outside of advertising speak “A very nineties sort of prerendered graphics”, all chequered patterns, shiny chrome, and twisting dreamlike interiors made up of whatever the heck the artist felt like creating at the time. I have a great fondness for this style even if in BloodNet the backgrounds are often too brightly-lit for what is supposed to be a crushingly oppressive dystopia and the lack of character sprite scaling often makes them look plain weird – the very first screen you get to wander around contains an ordinary chair your eyes will insist is about 12ft tall seeing as when Stark stands next to it his head only reaches the arm rests. In contrast to this amateur bungling (The Secret of Monkey Island, released years earlier, didn’t have this issue) the pixel art is basically perfect, as demonstrated by this in-game map of Manhattan I stitched together from several screenshots:

Wasn’t that well worth all the scrolling I just made you do? Character portraits are just as beautiful, using an effective combination of digitised photographs wearing pixelled enhancements ranging from sharp fangs to cybernetic implants to bring even the most minor character to life (even if these images don’t come close to matching their sludgily-rotoscoped sprites – a detail that could have been but sadly isn’t a clever commentary on the very cyberpunky idea of physical form and personal consciousness being two separate things).

Unfortunately that’s far from the game’s only cyberpunk slip-up: Even taking the game’s vampiric twist into account there’s nothing in here that’ll feel unfamiliar to anyone who’s even slightly aware of the genre and as always everyone’s either consuming, making, selling, or coming down from illicit substances, virtually ubiquitous shiny cyber enhancements are attached by surgeons with dubious credentials in back alley clinics, and an array of gangs carve their own violent little chunks out of the urban sprawl. You’ve seen it all before and in principle that’s fine – I bought the game entirely on the strength of its “A Cyberpunk Gothic” subtitle after all – the trouble is it’s just not that well-written.

That’s a complete quote up there – I haven’t sneakily introduced any mean-spirited editing to make that sound more My First Dystopia than it already is. BloodNet’s littered with text of that level spoken by characters with names – and these are again genuine examples – like “Nai Hilistic” and “Brother Complicitus”… oh and let’s not forget “Ennui”, the disdainful maitre d’ of a fancy restaurant called “Le Phood”. The fantasy RPG equivalent would be calling the muscular bruiser “Hits Tuff”, their druidic elf companion “Leafy McLeaface”, and have them drink in a tavern named “Le Pub”. Later on the vampire daughter of your undead sire – a woman who is attracted to Stark because she is a beautiful lady and Stark, as the leading man, deserves the sexual interest of any beautiful unclaimed women he meets – makes contact with him in cyberspace, proposing an alliance to topple her father and free them both. Shortly after this, after introducing Stark to people who can genuinely help in this risky endeavour and willingly assisting him in a fight against other vampires in her father’s own penthouse suite, she suddenly turns on you in kind of a “Oh well, guess I’m fighting against you with my dad now” sort of way. It’s so unexplained and abrupt it doesn’t feel like a shocking betrayal, it feels like you accidentally skipped a few key pages in a book. 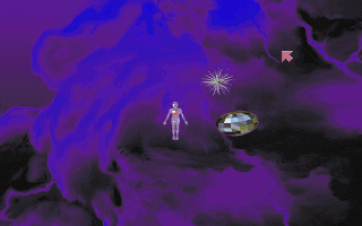 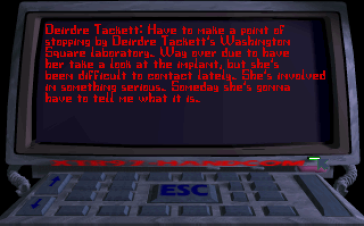 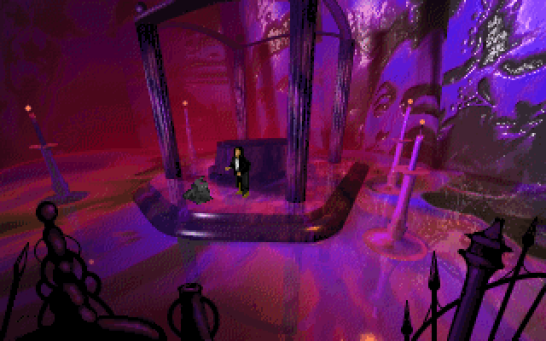 The same could be said of Stark himself: His backstory and the main plot thread both hinge on his current state as a man suffering so badly from excessive cyberspace use (caused during his time employed by the scenario’s megacorp, of course) he lost the ability to distinguish reality from virtual space, a condition only tempered by a neural implant installed by the scientist he’s desperately trying to find that conveniently also helps him resist his vampiric urges. Either one of these would be the perfect excuse to introduce some novel ways to unsettle the player – imagine an exhausted Stark, thirsty for blood, had his yes/no prompts briefly glitch into feed/feed as he spoke with an old friend or an important lead or if he walked into an area he’d been to before only this time the sky was the wrong colour and he could swear the company’s cyber security was bearing down on him…

Instead of that or even any more traditional concerns about daylight and not being allowed into churches (there are at least two holy locations, and Stark can enter both of them with ease) the closest the role-playing ever gets to acknowledging the gothic part of this cyberpunk gothic is when the UI makes a screeching noise should Stark’s hunger for blood start to rise to dangerous levels – and to fix that all you need to do is click “Bite” in the menu, click on an NPC, and that’s that problem instantly solved. Nobody ever seems to wonder why anyone went missing even if you attack the leader of a close-knit group as they stand right next to them and there’s never any chance of the act failing, kicking off a fight, or starting rumours about a new vampire roaming the streets of Manhattan.

The scariest thing about BloodNet – apart from all that Amiga disc swapping – was realising how ordinary a nigh-omnipotent megacorp capable of leaving hardworking and highly capable people utterly destitute on a vindictive whim or burning them up and casting them aside because it’s cheaper than hiring enough people to properly handle the workload coupled with an ineffective police force that mostly exists to keep “lesser people” in line felt – and we don’t even get the vampires-pulling-the-strings subplot*.

3 thoughts on “A cyberpunk gothic”