This sci-fi rescue ’em up by Lucasfilm – yes, that Lucasfilm – builds an entire game around one stunning technical achievement: Real time 3D flying within a fractal-generated landscape (and this is true 3D, not little tree>medium tree>big tree graphics running down the side of a palette-scrolling line of grey “road” fudging) on formats that I know from personal experience require some concerted effort just to get a functional text adventure running on them.

In spite of this phenomenal flexing of programmer muscle raw first impressions of this thirty-six year old adventure might not do much to get pulses racing: The sky of planet Fractalus looks a lot like a murky yellow soup, the landscape can only be described as “brown and pointy” – what little you can see of it thanks to the game’s short draw distance – but worst of all you’re not even there to shoot aliens! What kind of eighties sci-fi game gives you violent green extraterrestrials, your own spaceship, and then tells you you’re supposed to get busy doing something else?! 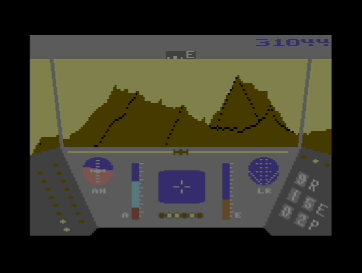 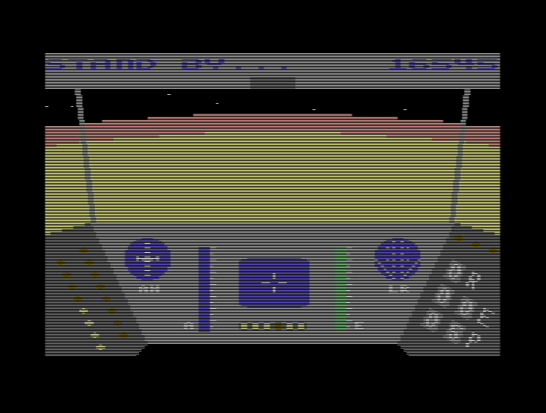 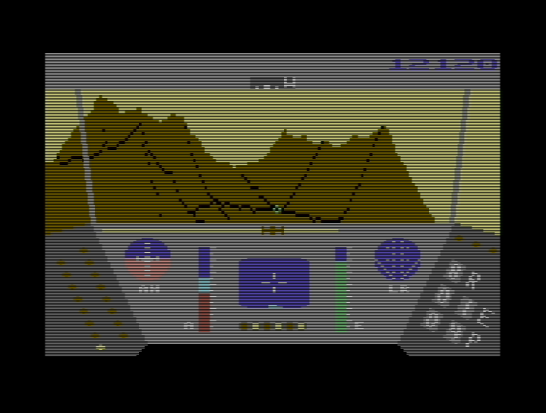 Well Rescue on Fractalus!, for starters (I do wish developers would stop including exclamation marks as part of their titles). Not that you’d know it from a quick glance at the front cover: Going off that the game’s the embodiment of eighties alien-bothering shooter fare (Space Invaders has a lot to answer for) with a full compliment of all the usual lasers, explosions, UFOs, and some sort of shiny spacesuit hero-guy sitting in the cockpit of a sci-fi vessel. Looking at the image again after spending a little time with the game reveals it to be an incredibly accurate physical representation of a typical in-game screen, right down to the shape of the rescued pilot’s helmet and the layout of the cockpit’s instrument panel. Impressive, but still easily interchangeable with a dozen other games from the same period.

It’s only when we flip the box over and take a look at far less heroic tale shown there that Fractalus starts to reveal its hand; the whole frame used to display the image of a downed and possibly unconscious pilot sitting in the scarred and gently burning remnants of a battered ship. They’re clearly vulnerable, alone, and their only hope of rescue is you. So long as you have the patience to wait for the tape to load, that is (I’m playing the C64 tape version here – floppy discs, cartridges, and other tapes were also available on a selection of the usual computer formats of the time).

Waiting for the tape to very slowly transfer its data across to the computer does at least allow you plenty of time to pop open the box and read the manual at your leisure. There’s all of the usual help in there: How to get the game up and running, colour-coded key commands across three different formats, the boring legal stuff and so on – but what it also does is sneak in lots of game-relevant information under the guise of scene-setting sci-fi snippets. At first this extraneous information looks like something an over-enthusiastic intern would produce during their first week at Lucasfilm; a nice effort for sure, but ultimately just some light fiction to gently amuse idle players for a few minutes then safely ignored once the game’s booted up.

It turns out the beautifully realised descriptions written on this fold-out piece of paper change the game completely – no, they are the game. Or maybe it’s the other way around. Whatever the case, once you’ve read it through you’re left in no doubt that the gap between what you’re being shown on your TV and what you’re supposed to believe is actually happening is wafer thin. Rescue on Fractalus, a game with pixels so large you can count them by hand, is everything – and exactly – what it wants to be. 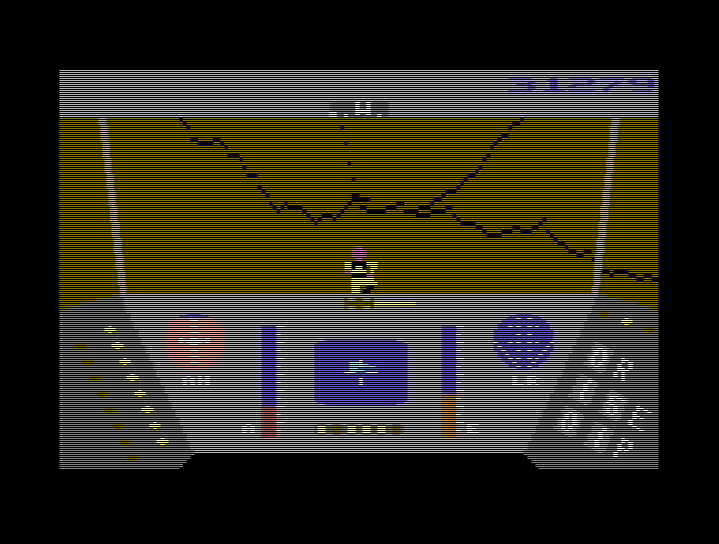 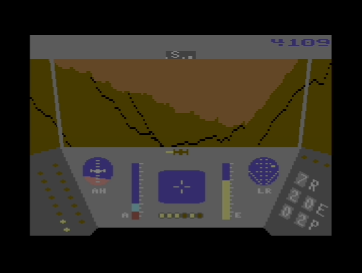 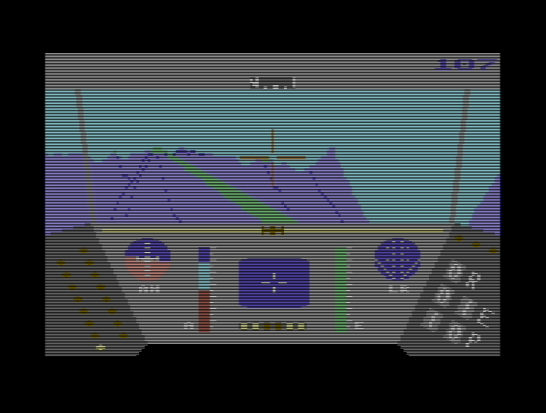 Remember the unappealing sickly sky colour and terrible draw distance I mentioned earlier? It turns out the atmosphere is yellow and murky because it’s composed of cyanitric acid – an acid strong enough to eat away at the spacesuits of those awaiting rescue within mere minutes. This, like every other fascinating tidbit in the manual, not only explains several in-game behaviours but also answers a few “But why don’t they just…?” questions before they’ve even been asked: This is the reason why these capable military officers stay where they crash and don’t try to get out and fight off the evil Jaggies or do the sci-fi equivalent of getting a bag of spanners and performing the emergency repairs necessary to rescue themselves. This is why a pilot that’s exposed themselves to the caustic outside air in the short run towards your rescue ship will desperately bang on the airlock door to be let in – and if you wait too long those bangs will grow more frantic before getting further… and further… apart… before falling silent. You monster.

Taking the whole acid-for-atmosphere feature a step further we can also safely assume this is why Fractalus as a whole is a craggy and inhospitable brown place devoid of buildings, lakes, forests, or any other form of life – you never see these things because they’re not there to see. This felt like something of a revelation to me – I didn’t have to peer out of the cockpit of my Valkyrie Fighter (first flight Feb 29th 2184, wing span 12.8 metres, max cruising speed 8640km/h – don’t call it a V-Wing) and try to imagine what I was supposed to be seeing because it as already right in front of me. I was flying over an endless expanse of dry brown rocks with a yellow sky simply because that’s what the planet actually looks like.

This straightforward realism applies to the Valkyrie’s cockpit too: Every single instrument, flashing light, and readout on your ship’s dashboard tells you something you actually need to know. There are wing clearance guides, showing how far off you are from the sides of those tight valley walls. The range-to-pilot gauge means you’re not flying around blindly waiting for a more precise ping on the equally functional long range scanner but instead always given a rough idea of a rescue beacon’s location (by the way, these beacons are actually shown out of your window too, as blinking green lights), and whether you’re getting closer or further away. There’s a specific light that comes on when your airlock’s open, and a functional targeting scope straight out of Star Wars. Every single one of these works as intended, giving players not only the tools to play the game well, but treating them to a pilot’s-eye-view of the insides of a working sci-fi ship as well. 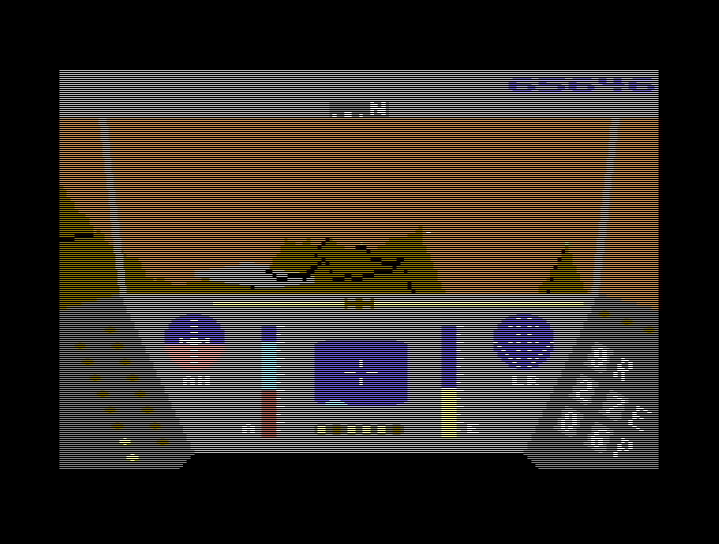 Wait, we’re not done yet! Your ship has just one weapon – an AMB (Anti Matter Bubble) torpedo generator because it’s been stripped back of all nonessential systems to allow you to carry more survivors at once – the game’s a rescue mission, remember? – and the reason why your energy levels get a boost whenever you rescue a pilot isn’t down to simple game-y rewards being dished out, it’s because those rescued “spacers” donate their suit’s energy cells once they’re safely on board. Early levels have little to no enemies because Droidcraft have already swept the area. Fractalus’ nine minute day/night cycle is only seen on later levels because the preceding ones all take place near the South Pole, during permanent daylight – and that nine minute rotation hasn’t been compressed for your benefit either; the planet really does spin that fast, and there are mentions of such an unusual routine playing havoc with other pilots senses. There’s a reason for everything – everything – and the game feels so beautifully cohesive and alive because of it. 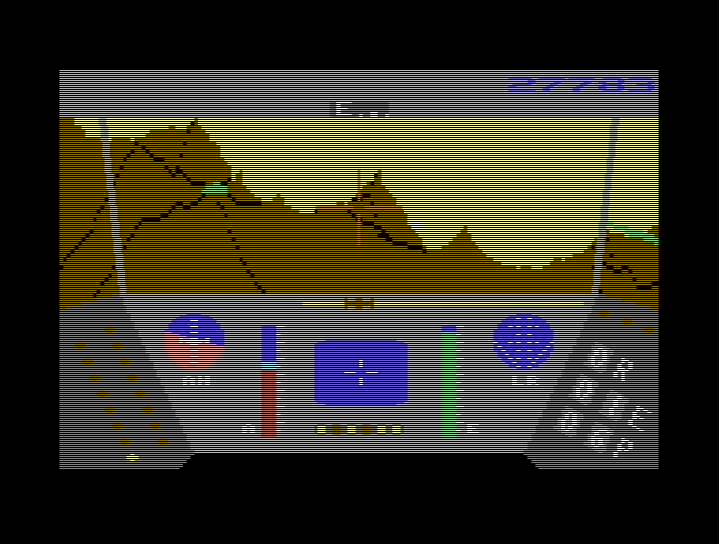 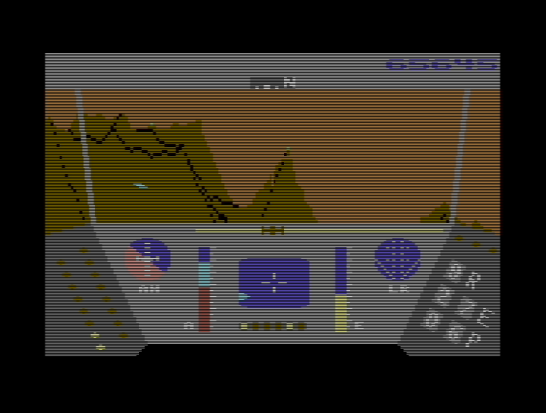 But what about people who don’t care for rich background information? What’s left for those who just wanted to play a game? Even stripped back in that manner – in a way it was never intended to be experienced – it’s still a joy to play. The procedurally generated fractal landscape is an interesting challenge to fly around, all sharp edges and twisting canyons, and the combination of Jaggi gun turrets sitting on high ridges with downed pilots nestled in the valleys below demands you place yourself in danger for the sake of the mission. The flying is immersive without being overwhelmingly sim-y, striking the right balance between giving you enough small things to do to make it believable (manually turning off your shields to allow pilots to enter without getting fried) but still keeping things simple (landing requires nothing more than a low altitude and hitting the L key). It doesn’t take long before you’ve settled into a comfortable locate, fly, land, rescue-routine, and then…

Bar a vague hint given in an unlucky Ethercorp spacer’s final transmission there’s no indication in Rescue on Fractalus that you’ll ever get to see a Jaggi up close, so back in 1984 there was a very good chance that the first time one appeared and tried to smash its way through your window would have been a genuine heart-racing shock. But as powerful as that jump-scare is it doesn’t take even the most unobservant person long to notice that the “pilot” up ahead has a suspicious green hue even when they’re only a few pixels high…

Which is why later missions silently throw another unsettling twist into the mix – the aliens learn to run towards you with a pilot’s helmet on. As with all the best scares in entertainment Rescue on Fractalus tells you the rules and then deliberately breaks them just as you were starting to get comfortable – and now every single person you go to rescue is a potentially game-ending threat. “Don’t worry about being captured” says the manual, drily “they don’t take prisoners”.

It’s a rare breed of a game that astonishes on every level, and it doesn’t even need any “for the time” apologia either – it’s just a good game, one that takes a very narrow and specific slice of sci-fi life and then spends all of its time and energy bringing every last pixel on screen to life. It may be easier to view Elite as the go-to example of hyper-ambitious retro spacefaring action, but Fractalus’ smaller scope with its dense and compellingly convincing setting is every bit its creative equal.

[This post wouldn’t exist without the kindness of Ko-fi supporters!]